by Sophia Akram in OZY
Housing for all: her fight could reshape Europe and beyond
25-10-2019 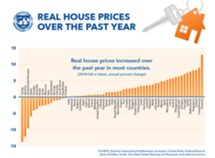 Helena Roseta has pushed through guaranteed housing in Portugal. Now the rest of the world is taking notice.
From OZY's website


As the sun sets over Lisbon, new arrivals rattle their suitcases up a steep spiral labyrinth of roads toward their temporary homes. Sounds of fado, the Portuguese folk music linked to the resistance movements of the city’s poor, break out onto the cobblestone roads of Alfama. But the historic neighborhoods that birthed this music now mainly attract tourists and the Airbnb trade. The original residents left some time ago.

Resistance and neighborhoods are central to Helena Roseta’s life. A member of Parliament, former mayor, housing counselor, president of the Architects’ Association and revolutionary, Roseta witnessed her crowning achievement this month. Portugal’s Basic Housing Law, for which she wrote the framework, went into effect Sept. 3, taking the country’s constitutional right to housing and adding legal teeth to tackle hyper-gentrification for the first time.

In 1976, two years after the country emerged from dictatorship, Roseta sat on the committee approving the constitutional right to housing. This was followed (1) by a large housing program with public, technical and financial support for local initiatives, but the effort was short-lived.

Meanwhile, populations were growing in urban centers, which led to overcrowding and illegal settlements. By 2011, there were 735,128 empty properties in Portugal, 184,909 of them in Lisbon (2), due to high rents and stagnant wages. Real estate speculators and foreign investors snatch such properties up, renovate them and sell them as luxury apartments or rent them on Airbnb. That leaves thousands of families with severe housing shortages.

The trend was fueled by liberalized rent laws following the 2008 financial crisis and the 78-billion-euro International Monetary Fund bailout. The inner city was hit hardest: Alfama’s population has fallen from 20,000 to 1,000 since the 1980s, according to Luís Filipe Gonçalves Mendes, a researcher at the Institute of Geography and Spatial Planning of the University of Lisbon. The IMF pegged Portugal’s housing price growth as the seventh highest in the world in 2018. “The most educated generation ever has no access to housing, challenging our country’s whole future,” says Roseta.

The Basic Housing Law adds specifics to the right to housing set out in Portugal’s constitution: a toolkit of promoting public housing, tax incentives for affordable housing and making it easier to finance the rehabilitation of properties — all while decentralizing control. Although the law itself will not change the status quo immediately, Roseta says, Europe is taking notice. And in the United States last week, Democratic presidential candidate Bernie Sanders proposed a $2.5 trillion “Housing for All” plan that combines new spending with zoning and rent regulations.

Roseta is used to extended fights against long odds. At age 19, she told a teacher she wanted to be an architect to resolve her country’s housing woes — “I am still trying,” the 71-year-old says. Soft-spoken and with a gentle air, her temperate demeanor disguises the steely determination that the mother of three and grandmother of seven has possessed since António de Oliveira Salazar’s dictatorship. After catastrophic flooding in 1967 left 500 dead in Lisbon’s poor suburbs, Roseta resolved that the dictatorship must be overthrown for safe housing to become a reality, and she was jailed before the 1974 Carnation Revolution.

In the newly democratic country, Roseta rose through the political ranks — including a stint as mayor of Cascais, a town outside Lisbon, in the 1980s. A turning point came in 2007, when Roseta led the Independent Citizens Movement for Lisbon, prompting her to quit the Socialist Party, and she was elected to the city council.

In 1998, Roseta founded a successful movement to decriminalize abortion during the first 10 weeks of pregnancy; a year later, she helped coordinate the national movement for East Timor when the former Portuguese colony emerged from Indonesian rule. “For the hardest causes on which traditional politicians feared not stake their careers, she was always there. She’s fearless,” says Lisbon City Councilor Rui Franco, a colleague and longtime friend of Roseta’s.

The next few months will be crucial in implementing legislation that could ripple throughout Europe. Franco says other European countries are considering a version of Portugal’s law, though he wouldn’t name them. Michaela Kauer, the Vienna-based coordinator for the EU Urban Agenda Housing Partnership, is more skeptical. “People would look at the example of Portugal,” she says. “But I think it’s not always so easily transferable.”

Roseta could well be there, hovering in the background, continuing the fight. “I retire from political activity,” she says, “but I do not retire from life.”


What’s the last book you read?
I usually read several books at the same time. The last ones finished: Leonardo da Vinci, by Walter Isaacson; Seven Brief Lessons on Physics, by Carlo Rovelli; and Le naufrage des civilisations (The Shipwreck of Civilizations), by Amin Maalouf.

What do you worry about?
”The bewilderment of the world.” It’s the title of an extraordinary poem by our poet (Luís de) Camões, from the 16th century. The world was changing at that time, as it is again.

What’s the one thing you can’t live without?
Hope.

Who’s your hero?
Ricardina Cuthbert, an African woman leader in a slum near Lisbon — generosity and joy in the poorest conditions.

What’s one item on your bucket list?
I wouldn’t like to die without seeing a fairer world. I still want to fight for it.

(2) - Lisbon, here, refers to the whole metropolitan area; in the city 50.226 housing units were empty by that time